5 Reasons Why We Love to Hate Canada’s Food Guide

You may have noticed Canada’s Food Guide making headlines recently after attendees at the recent annual Canadian Obesity Summit questioned the “scientific integrity and usefulness of Canada’s Food Guide”, particularly one item in the Vegetables and Fruit group – juice. The “juice issue” only scratches the surface of the problems with Canada’s Food Guide, and why dietitians everywhere hate it when people say that they think we only know how to follow and teach the guide.

1. Potatoes and corn are considered the same as kale and carrots.

Can you spot the potato and sweet potatoes?

While juice is being singled out as not belonging in the Vegetables and Fruit group, potatoes are probably snickering to themselves for getting a free pass. Despite all the carb fear that’s been going on for the past decade or two, potatoes are still the most commonly consumed vegetable in Canada. Canada’s Food Guide tries to beat this by recommending that we “eat at least one dark green and one orange vegetable per day”, but if your dark green vegetable is peas and your orange vegetable is sweet potato, that would mean almost 3.5 times the calories and carbohydrates compared to if you chose kale and carrots. Since I think most people count potatoes as more of a starchy food than a vegetable anyway, I would like to see Canada’s Food Guide move starchy vegetables like potatoes, sweet potatoes, corn and peas in with the grain products (changing the name to “Grains and Alternatives”), perhaps adding that starchy vegetables are more nutritious than refined grains. Also, I think when they say “dark green vegetable”, they mean “dark green, leafy vegetable”, but I know how to game the system. 😉

The first reaction many people have to Canada’s Food Guide is that it recommends too many grains. In fact, previous versions of the guide recommended that we eat more grains than vegetables and fruit! However, Canada’s Food Guide might not be recommending as much grain as you think, as the serving sizes are very small.

For example, the Food Guide says that a bagel should weigh 90 g, but if you look at the bagels at say, Tim Horton’s, all of them range from 113-123 g, meaning they each count as at least 2.5 servings of grains, not 2. Similarly, all of Country Harvest‘s breads weigh in at 45 g per slice (vs. 35 g), so if you make a sandwich, you are technically eating 2.5 slices of bread. Some brands, like Dempster’s or Silver Hills, stay close to the Canada’s Food Guide serving sizes, but it’s really a matter of buyer beware.

Cereal is even more confusing, as a serving is listed by weight, not volume. This is because puffed cereals, like Froot Loops or Corn Pops, are less dense and take up more space than flaked cereals and granolas. This means that 30 g of cereal can range from 12 Mini-Wheats, to 1/3 cup Alpen Muesli, to about a cup of Cheerios. So, if your cereal bowl holds 1 cup (and I would guess most people’s would hold more than this), you could be eating anywhere between 1-3 servings of grains!

So for those of you keeping score at home, if you ate a cup of muesli for breakfast then a sandwich at lunch, that could be 8 servings of grains – the amount recommended for an adult male – in just two meals!

3. It only recommends that we eat whole grains half of the time.

While we know that whole grains are higher in fibre, less processed and linked to lower heart disease risk, Canada’s Food Guide only recommends that we eat whole grains half the time. Why? To make up for the fact that processing whole wheat into white flour strips away a lot of the nutrients, manufacturers are required to add several B vitamins and iron back into the flour to higher than original levels. On the other hand, whole grain products are not enriched, so Canada’s Food Guide feels that we need to eat white bread and white pasta in order to take advantage of these added nutrients.

In reality, we don’t need these added nutrients. Thiamine, riboflavin and niacin deficiencies are rare. Folate deficiency is uncommon in men; women have higher needs due to increased risk of birth defects with inadequate folate, but Canada’s Food Guide already recommends that women of childbearing age take a prenatal multivitamin with added folate. It’s also much easier to meet folate needs by eating food other than grains. For example, a cup of lentils has over three times as much folate than a cup of enriched spaghetti.

Similarly, that same cup of spaghetti only has as much iron as an ounce of steak, and the iron added to grain products is less readily absorbed.

4. Milk and Alternatives is a misleading food group.

I love milk, yogurt and cheese, and am one of those unicorn Asians that are for some reason not lactose-intolerant. Dairy foods are not just a good source of calcium – they’re a good source of protein, phosphorus and magnesium, among other nutrients, and there are other health benefits associated with drinking milk. However, the Milk & Alternatives food group comes mostly from the idea that this is the only way Canadians know how to get calcium – notice how kefir, which nobody has ever heard of, or evaporated milk, which no one ever eats, gets a spot in the guide, but not cottage cheese?

While there are benefits to eating dairy, I don’t think it deserves to get singled out as its own food group just because research shows that there are benefits. Otherwise, why aren’t we singling out oats? Or nuts? Or blueberries? It doesn’t help that there is a high prevalence of lactose intolerance and a lack of dairy in some traditional diets of our multicultural population.

What I would like to see is Milk and Alternatives and Meat and Alternatives grouped together as Protein-Rich Foods. Since low calcium intakes are common, there should be guidance throughout the food groups as to choosing high calcium foods like tofu, sesame seeds, chia seeds and dark leafy greens – not just milk and fortified soy/almond/hemp/whatever milk!

While including healthy fats in the diet is important, the way that the current recommendation to “include a small amount … 2-3 Tbsp… of unsaturated fat each day” is written can be easily misinterpreted to mean that we need to cook with more oil or use more salad dressing, which in turn can add unnecessary calories to our diet. I don’t think Canadians have trouble getting enough fat in their diet; instead of recommending a specific amount, I would like to see better highlighting of healthier sources of fat, like nuts, seeds, avocado, fish (and maybe even dairy?) that should make up more of the diet.

The Guide is Not Going Away

While many of my dietitian colleagues have eschewed Canada’s Food Guide, I still use it occasionally as a starting point to talk about including a variety of foods in the diet, carbohydrate vs. protein-rich foods and portion sizes. Another colleague recently pointed out a more important use – as a policy document to illustrate the minimum amount of food a healthy person would need to help advocate for people who have poor access to food. While there’s lots of debate in terms of whether Canada’s Food Guide should be less specific about types of food and focused more on the eating experience (like the Brazilian Food Guide), or more specific (like Harvard’s Healthy Eating Plate and Pyramid), I hope one day Canada’s Food Guide will be something we love to love.

Dr. Yoni Freedhoff, medical director of the Bariatric Medical Institute and blogger at Weighty Matters, recently wrote an op-ed on how Canada’s Food Guide is broken and no one wants to fix it.

Nerd out by looking at the history of Canada’s Food Guide and current food/dietary guidelines from around the world.

Sign up now to get the latest on intuitive eating, mindful eating, and Health At Every Size® delivered right to your inbox.

To Heal Your Relationship with Food and Your Body, Start with Mindfulness

Looking for a few more steps? 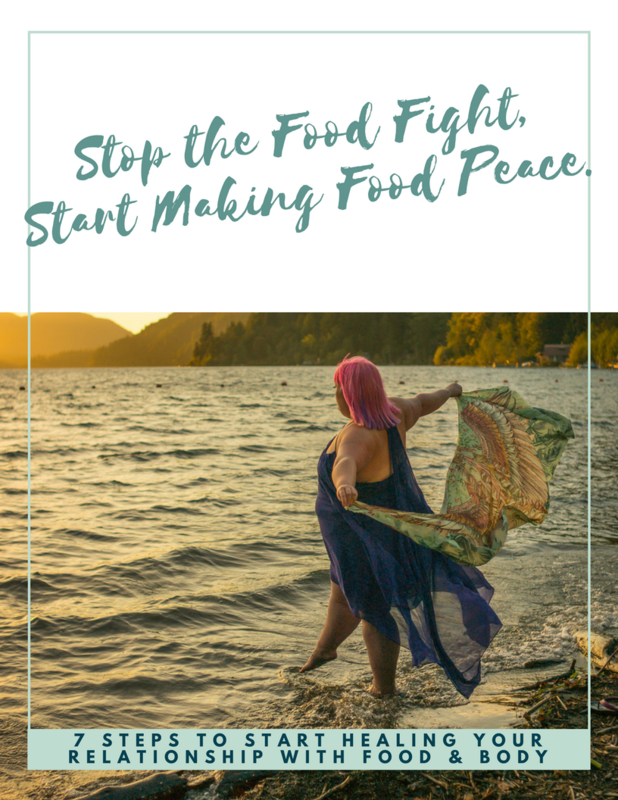